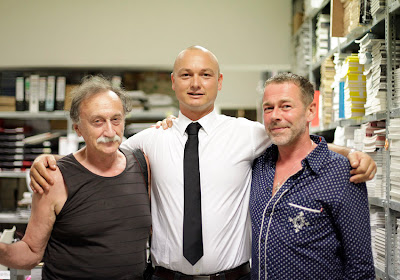 As of August 1st, 2010, the submissions will be officially open for the scheduled publication Hijacked 3 - Australia / United Kingdom. Photographic artists / photographers may submit 12 - 18 images / fotos from a series / body of work as lo resolution jpegs. ie. Screen resolution files are fine. These photographs, may be zipped or compressed and emailed to info@bigcitypress.com.au

Optional: You may wish to include an artist statement / description of the photographic series and a short biography and/or cv. The project Hijacked Volume 3 - Australia / United Kingdom is an open submission process and is open to all people of these countries. The submission of work does not guarantee inclusion in the final publication, nor does shortlisted artists, guarantee inclusion in the final published book.

No explanations or feedback will be forthcoming or deemed necessary from the publisher and editorial staff if an artist or photographer is not chosen for the publication and/or from the Hijacked 3 shortlisted group.

FAQS: Like 'is there a theme/s or special interest to Hijacked 3' ?? The short answer is no. But obviously there are themes and concepts to the works, but the curatorial conceptual parameters are not premeditated, they will be apparent retrospectively and in hindsight, determined through the editorial process, by the editors, and illustrated in the final publication through specific selections, sequences, layout, design and juxtapositions of photographic artwork.

It is preferred the submitted photographs are new, exclusive and previously unpublished, but it is not a determining criteria. We are trying to support a survey of new, emerging, under represented artworks aligned with some established photographers. It is preferable that you are from Australia or the United Kingdom, if you are considering submitting work to this project.

Photographic artists will be shortlisted and published on the Big City Press blog on a weekly basis, as from August 1st, 2010 for one year.

For any further questions or queries please email info@bigcitypress.com.au 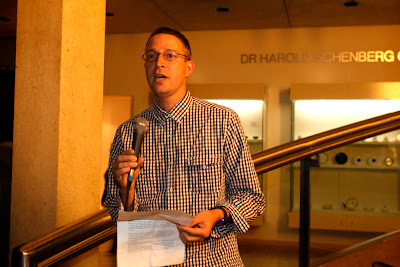 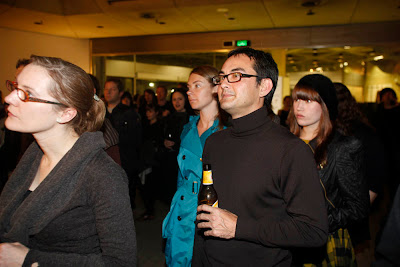 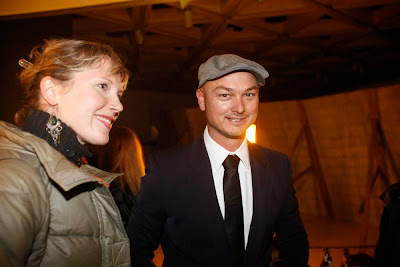 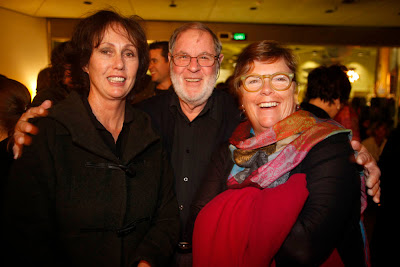 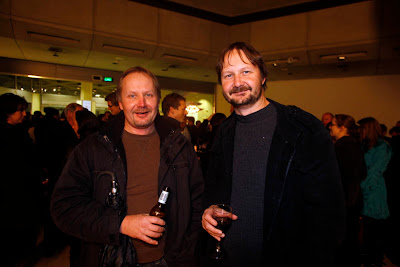 Hello and welcome all to the Art Gallery of Western Australia for the launch of Hijacked: Volume 2.

I would like to acknowledge that the Gallery is built on Nyoongar land.

The Hijacked project was initiated by Mark McPherson in 2005 as a photocopied ‘zine. It took what was cool about where ‘zine culture ended up going via the American post-punk and skate scenes, by riffing off the way those publications worked against hierarchical culture to create liberating peer-based zones of exchange. So because the ‘zine format functioned for McPherson as a guerrilla platform, to announce the work of peers and to shape a society of creative equals, it expressed the general evolution away from the zine genre’s fan-roots as DIY printed love songs to movie stars and pop icons made by spotty bedroom romantics. This is a way of saying that Hijacked, in its various forms, has always been about framing, not fandom per se. While there is undeniably love in it, it is, therefore, not devotional, and, now, in its current state of hardcover monumentality, it might be seen to stand on the opposing pole to the intricate first person longing of the world’s other great uber zine, Stop Breathing. In my mind, in ‘zine culture in general, that is where Hijacked now stands. There is Stop Breathing – almost obsessively over-thought singly authored analyses of the world of mostly American indie music - and there is Hijacked – sprawling, restless, decentred, local and international, shooting from the hip, yet obsessive in its own delirious way. Both began life in lo-fi formats and expanded to be all they could be, while staying true to their defining visions.

Hijacked’s vigorously loose ambit was facilitated in the title. In an overt way it allowed other artists to take over, to hijack it and take it to their own destination. Thus, early issues were also produced by outstanding Perth creatives such as Thomas Jeppe, Conor O’Brien, Marcus Canning and Hannah Mathews. In a covert way, the idea of hijacking also, I believe, granted a kind of permission to lift practices from the context of their production and give them a new meaning through this violence. It is more forceful than cultural jamming, it is latently heavy, and this weight is supported by the horizontal field, the sense that Hijacked works, figuratively at least, in the manner of Fugazi and, later, The Evens -(where possible) no stage, no difference between audience and creator.

I dwell on this because I think the original ethos pulses through its relaunch as the hardcover book. The first outing, published in 2008 to great success, saw McPherson and co-editor Max Pam bring Australian artists together with American. The tone was post party, hung-over soulful, humans and spaces merging in a graphic liquid bath. It was like two New Worlds, two products of the colonial oceanic slough faced each other and asked, what the hell brought us here? And what the hell are we gonna do with these cars, in these hotel rooms, with these inked skins? Hijacked 1, answered these questions visually in wildly entertaining ways.

This volume sees McPherson joining fellow editors Ute Noll and Markus Schaden to create a dialogue between German and Australian photographers. And in it, the feel is ‘post hurricane’. The cobwebs are gone and the old and the new world stutter and speak with and at other, their gestures, their communications opening out the implicit politics that structure post war Germany and contemporary colonial Australia. As such, issues of freedom, of movement, of desire, of the world as ‘troubled playground’, shape the work. And so there is a celebration of youthful vigour and a tremulousness thanks to the awareness that the adolescent and recently adolescent mindset are in no way separate from the dangerous voyage of history, and the architectural and human structures that we live through. What this book shows is that we are always hemming ourselves in, always challenging those boundaries. It is in this way that the political and the aesthetic are carefully unified in the project. And it’s a coolly complicated thing, obvious and not so, and it’s something the fine essays circle in ways both dense and airy. These essays sit discreetly between the two hemispheres’ art works, functioning as a dividing wall of interpretation that might be seen as being both respected and broken down by the photos themselves. Easts and Wests, Norths and Souths, push together, imagistically, against the words that would contain them in the middle. It’s a smart layout, but then everything is smart about this project.

And as such, I want to pay a small tribute to Mark McPherson. Though he has collaborated, and drawn on many, many people’s energies, Hijacked is basically a testament to his force and his energy. He has a lot personally at stake in this. It is not a career, but a drive that has caused him to make this. He has a brave and a wonderful vision and I am kind of in awe of it. In his essay in this book, Alasdair Foster quotes Henry Miller, saying that ‘chaos is the score upon which reality is written’. I think that sums up so much, not just about this book, but about Mark’s energetic approach to making culture, to being in a way our most important young photo curators and editors in this country. He is reaching out, refusing to be pinned by the local, and is making a new kind of global community of artists.

Beyond the book, is the tour of the exhibition. It is currently on show at the Australian Centre for Photography, where I am told it looks amazing. It is moving around not just eh country but the world, and will make an appearance in Perth at the John Curtin Gallery July-September 2011, something of a significant homecoming for the material, and I am positive it will look incredible in the crisp spaces of the exquisite gallery.

Before that, you have the book. It is available from our shop right now and I need to say that all sales from the book shop go toward assisting the gallery fund a range of activities, exhibitions especially. I would like to congratulate Mark, Ute and Markus on their achievements, all the incredible photographers several of whom are here tonight, and also the brilliant Fabio Ongarato and his team for the impeccable graphic design. Inspiring people all. Thanks for coming and have a great evening.

Fotos (from top to bottom) 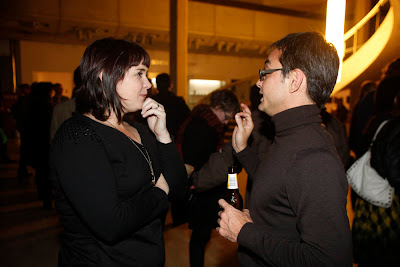 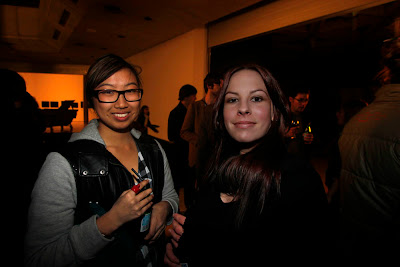 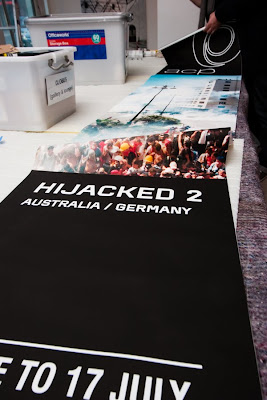 The traveling book sales man hits Europe and the UK, and elsewhare. I'll be undertaking 6 book launches in Europe & the UK between July 14th & August 5th. All the dates and information is outlined below, plus some events later in September. I hope you can make it to one of the events. 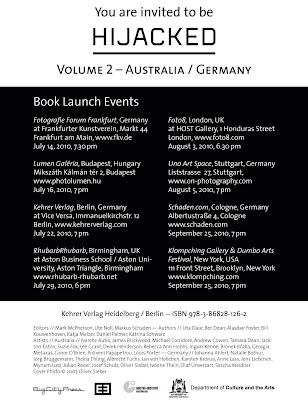